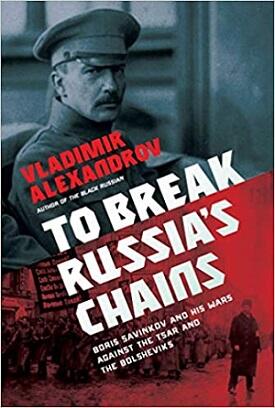 To Break Russia’s Chains: Boris Savinkov and His Wars against the Tsar and the Bolsheviks

On Thursday, October 21, Vladimir Alexandrov will discuss his most recent publication: To Break Russia’s Chains: Boris Savinkov and His Wars against the Tsar and the Bolsheviks (Pegasus Books). As noted in the commentary from the publisher, Savinkov was a “a paradoxically moral revolutionary terrorist, a scandalous novelist, a friend of epoch-defining artists like Modigliani and Diego Rivera, a government minister, a tireless fighter against Lenin and the Bolsheviks, and an advisor to Churchill, [who]… at the end of his life conspired to be captured by the Soviet secret police in the hope of striking one final blow against the tyrannical regime.” In his talk, Professor Alexandrov will focus on one of the most remarkable and revealing episodes in Savinkov’s long and tempestuous life.

Vladimir Alexandrov grew up in New York City in a Russian émigré family and studied geology before completing a Ph.D. in comparative literature at Princeton. After teaching in the Slavic Department at Harvard, he moved to Yale’s Department of Slavic Languages & Literatures in 1986, where he taught undergraduate and graduate courses on nineteenth- and twentieth-century Russian literature and culture (Tolstoy, Dostoevsky, Nabokov, Bely, among other writers and topics) until retiring in 2018 to write full time. While preparing to teach a graduate seminar on Russian émigré culture between the world wars, he discovered Frederick Bruce Thomas, the remarkable son of former slaves in Mississippi who became a multimillionaire impresario in tsarist Moscow and the “Sultan of Jazz” in Constantinople. This resulted in the biography The Black Russian, which is now being developed into a TV dramatic series in Hollywood. Professor Alexandrov has also written a number of academic books, including Limits to Interpretation: The Meanings of Anna Karenina. His next book will focus on Russia and the American Civil War. For more information about Professor Alexandrov, please visit his website.