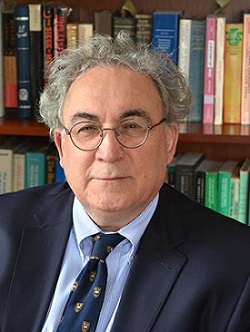 Abbas Amanat received his B.A. from Tehran University in 1971 and D.Phil. from Oxford University in 1981. He was a Carnegie Scholar of Islamic Studies (2005-2007) and was also was the recipient of the Mellon-Sawyer Seminar Grant for comparative study of Millennialism (1998-2001).

Professor Amanat is a Consulting Editor and longtime contributor to Encyclopedia Iranica where his major entries include “Constitutional Revolution” (1994); “Great Britain in Qajar Persia” (2002); “Hajji Baba of Ispahan” (2003) “Historiography of Qajar Iran” (2004), “Historiography of Pahlavi Iran” (2004) and “Islam in Iran: Messianism” (2007). He is the General Editor of Persia Observed series (Mage Publishers), which includes extensive introductions to new editions of E.G. Browne’s Persian Revolution (1995) and C.J. Wills’ In the Land of the Lion and the Sun (2004). He was the Editor-in-Chief of Iranian Studies, the journal of the International Society for Iranian Studies (1991-98), and served as the chair of the Council on Middle East Studies at Yale (1993-2004). He is currently Director of the Iranian Studies Initiative at Yale MacMillan Center for International and Area Studies.