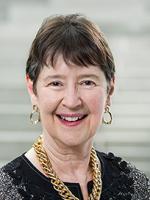 Adela Yarbro Collins joined YDS in 2000 after teaching at the University of Chicago Divinity School for nine years. Prior to that, she was a professor in the Department of Theology at the University of Notre Dame. Her first teaching position was at McCormick Theological Seminary in Chicago. She is serving as president of the Society for New Testament Studies from July 2010 until August 2011. She was president of the New England Region of the Society of Biblical Literature in 2004-2005. She was awarded an honorary doctorate in theology by the University of Oslo, Norway, in 1994 and a Fellowship for University Teachers by the National Endowment for the Humanities for 1995-96. Her most recent books are King and Messiah as Son of God, coauthored with John J. Collins (2009), and Mark: A Commentary in the Hermeneia commentary series, published in 2007. Among her other publications are Cosmology and Eschatology in Jewish and Christian Apocalypticism; The Beginning of the Gospel: Probings of Mark in Context; Crisis and Catharsis: The Power of the Apocalypse; The Apocalypse (New Testament Message series); and The Combat Myth in the Book of Revelation. She served as editor of the Society of Biblical Literature’s Monograph Series from 1985 to 1990. She currently serves on the editorial boards of the Hermeneia commentary series and the Journal for the Study of the New Testament Biblical Interpretation. Professor Yarbro Collins is a fellow of Trumbull College. B.A. Pomona College; M.A., Ph.D. Harvard University.