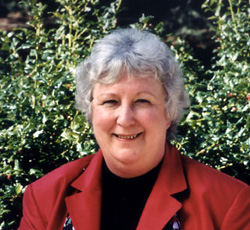 Diane Komp, Professor Emerita of Pediatrics, joined the Yale faculty in 1978. She grew up in Brooklyn, New York, where she enjoyed Midwood High School’s scientific, musical, and art opportunities. She firmly believes that science and the arts are fundamental to enjoyment of a long, happy life. After Houghton College and State University Downstate Medical Center, she practiced medicine in an academic setting, first at the University of Virginia and then at Yale. Through all those years she has sung classical sacred music, most recently with Bethesda Lutheran Church’s music series. After retirement, she built an art studio and has exhibited widely, including an exhibition at the Henry Koerner Center. In addition to her scientific publications, Komp has published nine books directed at a more general audience. In retirement, she has volunteered her time at the Overseas Ministries Study Center, primarily as art curator.