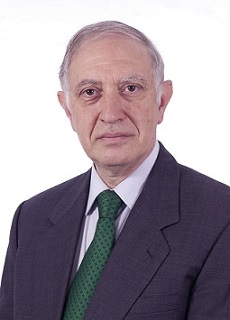 Francesco Iachello’s work has been dedicated to the study of symmetries in physics through the introduction of models based on symmetry and their application to physical systems. In 1974, Iachello introduced the interacting boson model of the nucleus. This model, developed in 1975-79 with Akito Arima of the University of Tokyo, Japan, and based on the concept of dynamical symmetry, has brought order in the classification of complex nuclei and in the understanding of their properties. Together with Arima, Igal Talmi of the Weizmann Institute of Science in Rehovot, Israel, and Takaharu Otsuka of the University of Tokyo, Japan, he provided in 1977-78 a microscopic interpretation of the interacting boson model. The constituents of atomic nuclei, protons and neutrons, pair up to form proton pairs and neutrons pairs. These correlated pairs have integer angular momentum, behave like bosons and move together in a collective fashion. In 1980, Iachello introduced an additional ordering idea in the classification of spectra of nuclei, called dynamical supersymmetry. In some nuclei there are unpaired particles. These unpaired particles have half-integer values of the angular momentum, behave like fermions and move in a coordinate fashion with the bosons. Dynamical supersymmetries in nuclei are based on the interacting boson-fermion model of the nucleus, introduced by him in 1978 and developed with Olaf Scholten of the University of Groningen, The Netherlands in 1979-1981. Dynamical supersymmetries, developed with A. Baha Balantekin, Itzak Bars and Roelof Bijker in 1981-1983, brought order in the classificationof nuclei with unpaired particles. In 1981, Iachello introduced the vibron model of molecules. This model, developed with Professor Raphael Levine of the Hebrew University, Jerusalem, in 1982-83, and also based on the concept of dynamical symmetry, provided a framework for the classification of molecules. Spectra of molecules are constructed with quanta of excitation called vibrons. In 1991-96, the vibron model was extended to the study of polyatomic molecules in collaboration with Stefano Oss of the University of Trento, Italy. In addition to these three major achievements, Iachello has explored further the concept of symmetry in the study of collisions between particles in the years 1983-86 (algebraic scattering theory), with Y. Alhassid and F. Gürsey, in the study of electronic spectra of molecules (electron-vibron model) in 1986-87, with A. Frank and R. Lemus, and in the study of spectra of hadrons (algebraic model of baryon and mesons) in 1994-1996, with R. Bijker and A. Leviatan. In 2000-01, Iachello returned to the study of symmetries in nuclei and introduced the concept of dynamical symmetries at the critical point of phase transitions. These symmetries describe systems undergoing phase transitions and extend the concept of dynamical symmetry to the most challenging situation one may encounter in quantal systems. They were enlarged in 2005 to supersymmetries at the critical point of phase transitions in mixed systems of bosons and fermions. In recent years, Iachello has explored the role of symmetries in quantum phase transitions and co-introduced in 2008, with M.A. Caprio and P. Cejnar, the concept of excited state quantum phase transitions. This concept provides a framework for understanding properties of spectra of soft molecules which exhibit, at some excitation energy, a shape phase transition from linear to bent (with F. Perez-Bernal). He has also used in 2009-2017 the interacting boson model to calculate nuclear matrix elements for double beta decay, a process of importance for determining the neutrino mass (with J. Barea and J. Kotila). Additionally, he has investigated the role of discrete symmetries in the clusterstructure of light nuclei in 2014-17 (with R. Bijker), and developed an algebraic model of crystal vibrations (with B. Dietz). For his work in symmetries in physics, Iachello received the 1990 Eugene Wigner medal of the Group Theory and Fundamental Physics Foundation, for the interacting boson model the 1993 Tom Bonner prize of the American Physical Society (shared with A. Arima), for his work on symmetries and supersymmetries the 2002 Lise Meitner medal of the European Physical Society (shared with J. Philip Elliott) and the 2010 Enrico Fermi prize of the Italian Physical Society. Besides these prizes, Iachello has received the AKZO prize of the Netherlands Society of Sciences (1981), the Taormina Prize of Arts and Sciences (1991), the Centennial Prize of the Italian Physical Society (1997), the Italian National Medal of Science (2007), the Majorana Prize (2007), the Commemorative Medal of Charles University, Prague (2008), and the Somani Volta Prize (2009). He has been awarded honorary doctoral degrees from many institutions including the University of Ferrara, Italy, the University of Seville, Spain, Chung Yuan University, Republic of China, the University of Bucharest, Romania, the Hebrew University, Jerusalem, Israel, the Technical University, Darmstadt, Germany and the University of Catania, Italy. He has been awarded honorary professorships from the University of Nanjing, China, the University of Groningen, The Netherlands and the Liaoning Normal University, Dalian, China. He is Foreign Member of the Royal Netherlands Academy of Arts and Sciences, of the Croatian Academy of Arts and Sciences, of the Mexican Academy of Science, of the Italian Galilean Academy and of the Academia Europaea. He is a fellow of the American Physical Society, of the American Association for the Advancement of Science and honorary fellow of the Hungarian Eotvos Physical Society, the Hellenic Nuclear Physics Society and the Italian Physical Society. For his work on symmetries in molecules, he was awarded in 1988 a professorship from the Chemistry Department at Yale University, and he is currently J.W. Gibbs Professor of Physics and Chemistry, Emeritus. Iachello has served in many advisory committees including those of the Department of Energy, of the National Laboratories at Oak Ridge (ORNL), Brookhaven (BNL) and Argonne (ANL) and of the Istituto Nazionale di Fisica Nucleare, Italy, and the Grand Accelerateur National d’Ions Lourdes, France. Iachello has also written several articles on symmetries in the arts and their connection with symmetries in the sciences. Although he is a theoretical physicist, his interests extend to many other subjects, including music, especially Renaissance and Baroque music, and literature, especially Italian, Spanish and Russian poetry of the 20th century.