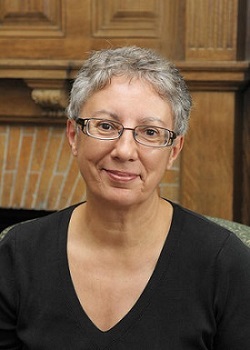 Hazel Carby is the Charles C. and Dorothea S. Dilley Professor Emeritus of African American Studies and Professor Emeritus of American Studies at Yale, a Fellow of the Royal Society for the Arts, and Roth Distinguished Visiting Scholar Dartmouth College. Among her many recent honors, Professor Carby was awarded Yale’s prestigious William C. Clyde DeVane Medal from the university’s chapter of Phi Beta Kappa and was elected as an Honorary Fellow of The Learned Society of Wales, both in 2021.

Professor Carby is the author of Imperial Intimacies, A Tale of Two Islands (Verso, 2019), which was selected as one of the “Books of the Year for 2019” by the Times Literary Supplement. In 2020 the book was a finalist for the John Hope Franklin Publication Prize of the American Studies Association, received the “highly commended” PEN Hessell-Tiltman Prize, and was the winner of the British Academy’s Nayef Al-Rodhan Prize for Global Cultural Understanding. Additional books include Reconstructing Womanhood: The Emergence of the Afro-American Woman Novelist (OUP, 1987), Race Men (Harvard, 1998), Cultures in Babylon (Verso, 1999), and Empire Strikes Back: Race and Racism in 70s Britain (co-author, Routledge, 1982). Her recent articles include: “Imperial Intimacies—further thoughts,” Small Axe, 64, March 2021; “Between Black and White,” London Review of Books, 43, 2, January 2021; “Black Futurities: Shapeshifting Beyond the Limits of the Human,” Invisible Culture, 31, November 2020; “The National Archives,” Invisible Culture, 31, November 2020; “Peine forte et dure: Punishment by Pressing,” London Review of Books, 30 July 2020; “Safe? At Home?” Feminist Review, 6 July 2020; and “A war half won,” The Guardian (Weekend), 16 November 2019.

Professor Carby teaches courses on issues of race, gender, and sexuality through the culture and literature of the Caribbean and its diaspora; through transnational and postcolonial literature and theory; through representations of the Black female body; and through the genres of science fiction. She is a dual citizen of the U.K. and the U.S.A.