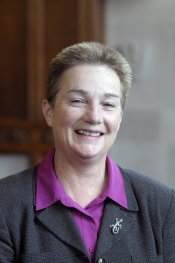 Professor Judy Krauss has been a member of the School of Nursing faculty since 1971 and served as Dean of the School from January 1985 through June 1998. She served as Master of Silliman College, one of Yale’s undergraduate residential colleges, from July 2000 through June 2015 and Chair of the Yale University Council of Masters from July 2003 through June 2009 and from July 2014 through June 2015.  She was the Founding Editor of Archives of Psychiatric Nursing in 1985, holding that role for 20 years.  In 1998, the American Academy of Nursing and the American Nurses Foundation appointed her Distinguished Scholar in Residence at the Institute of Medicine (IOM), where she helped conduct the background research for the IOM report America’s Health Care Safety Net: Intact, But Endangered. A longtime nursing educator and noted expert on care of people with serious and persistent mental disorders, Professor Krauss is the recipient of numerous honors: American Nurses Association Distinguished Contributions to Psychiatric Mental Health Nursing; Boston College Alumni Achievement Award of Excellence in Health Care; Connecticut Nurses Association, Josephine Dolan Award for Excellence in Nursing Education; Connecticut League for Nursing Leadership in Education Award; Sigma Theta Tau Distinguished Lecturer; Society for Education and Research in Psychiatric Nursing Jeannette Chamberlain Service Award; Yale School of Nursing Distinguished Alumna Award; and the Yale School of Nursing Medal.