Department:
Institute of Sacred Music and School of Music 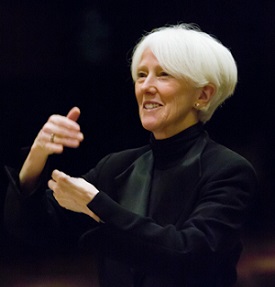 Marguerite L. Brooks served for thirty-five years as chair of the conducting program at the Yale School of Music and director of choral music at the Yale Institute of Sacred Music. As founding conductor of the Yale Camerata, one of Yale’s first campus/city arts collaborations, Brooks led hundreds of musical performances featuring some of the most innovative and wide-ranging programming in the field. She has long been a champion of new music by composers of a diverse array of gender, ethnic, and racial backgrounds. The Camerata and its chamber chorus have performed music from the middle ages to the present day, and the catalogue of composers ranges from Albinoni to Argento, from Palestrina to Pärt–along with Julia Wolfe, David Lang, Tawnie Olson, Aaron Jay Kernis, Caroline Shaw, Robert Kyr, Reena Esmail, and many more.

Brooks’s former students occupy positions of musical leadership at major churches and cathedrals around the world and in leading academic institutions. Among her students are the founding conductors of Grammy-nominated choirs Conspirare, Roomful of Teeth, and Seraphic Fire. Brooks has been active as a guest conductor, teacher, and clinician. She was a juror for the Eric Ericson conducting competition in Sweden, and has conducted, given master classes, taught, and adjudicated in North and South America, Europe, and Asia. She holds degrees from Mount Holyoke College and Temple University, and has served on the faculties of Smith and Amherst Colleges and the State University of New York at Stony Brook.

Brooks was cited by the Yale School of Music for cultural leadership in music, and has received alumni awards for distinguished work in her field from both Mount Holyoke College and Temple University. Presented with a Lifetime Achievement Award by the Connecticut chapter of the American Choral Directors Association in 2016 and by Choral Arts New England in 2019, Brooks is proud to have been honored as a Woman in History by the Barnard School. In 2020 Brooks received the Helen Kemp Award for Lifetime Commitment to Excellence in Choral Music from the Eastern Region ACDA. The National Collegiate Choral Organization, of which Brooks is a charter member and an honorary life member, celebrated her retirement in 2020 by initiating the Marguerite L. Brooks Commissioning Fund for New Choral Music.