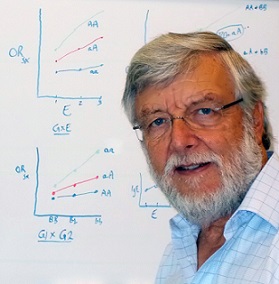 Bracken is the former Head of Chronic Disease Epidemiology at Yale University and former Vice Chairman (Deputy Dean) of the Yale School of Public Health where he has studied and taught for the last 44 years. He is a sometime Research Fellow in Green Templeton College, Oxford University. Professor Bracken has published some 380 articles in the scientific literature and has authored three books: Perinatal Epidemiology (1984) and Effective Care of the Newborn Infant (with J.C. Sinclair, 1992) both published by Oxford University Press. In 2006 this last book, which introduced the concepts of meta-analysis into neonatology, was named by the British Medical Journal as one of the most influential books in evidence-based medicine and was instrumental in assisting the foundation of the international Cochrane Collaboration. His new book: Risk, Chance and Causation: Investigating the Origins and Treatment of Diseasewas published by Yale University Press in 2013. He is the founding (in 1979) Director of the Yale Perinatal Epidemiology Unit and Co-Director of its successor, the Yale Center for Perinatal, Pediatric and Environmental Epidemiology. Professor Bracken has taught courses in evidence-based medicine and health care, pharmaco-epidemiology, perinatal epidemiology and general epidemiology at Yale for many years. He has directed numerous epidemiological investigations, almost all of which were funded (over $50 million in total) by the United States National Institutes of Health (NIH). He has served on numerous study sections and committees of the NIH including the Council of the National Institute of Deafness and Communicative Disorders. He chaired the first Congress of Epidemiology in 2001 and the first international colloquium on genome–wide association studies in 2006. He consults for many international corporations and agencies including the World Health Organization and he has served as the elected President of two major epidemiological organizations: the American College of Epidemiology and the Society for Epidemiologic Research. Professor Bracken is the 2013 recipient of the Lilienfeld Award from the American College of Epidemiology.