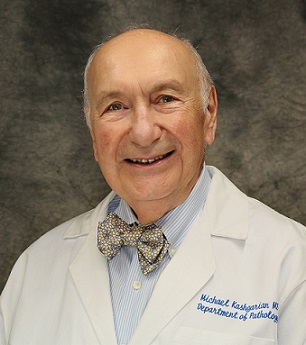 Michael Kashgarian, Professor Emeritus of Pathology and Molecular, Cellular, and Developmental Biology, received his B.A. from New York University in 1954 and his M.D. from Yale in 1958. He had postgraduate training in internal medicine at the Washington University School of Medicine and in pathology at the Yale-New Haven Medical Center. Following a research fellowship in renal physiology at the University of Gottingen, he joined the faculty of the Yale School of Medicine, where he rose to the rank of professor and served twice as interim chair of the Department of Pathology. He is the author of more than 300 scientific publications and Diagnostic Atlas of Renal Pathology, currently in its third edition. Among numerous awards and honors, he was elected fellow of the American Association for the Advancement of Science and has served as a consultant to the Department of Health and Human Services and the Department of Defense. He has been a visiting professor at more than fifty universities throughout the world. Active in alumni affairs, he received the Distinguished Service Award of AYAM and served as secretary of the Board of Governors of AYA.