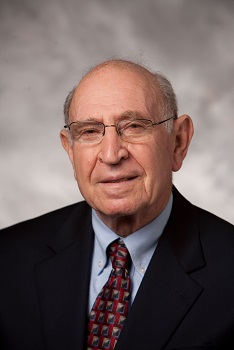 Myron "Mike" Genel, professor emeritus and senior research scientist in pediatrics at the Yale University School of Medicine, joined the medical school faculty in September 1971 and was associate dean for government and community affairs for nineteen years until January 2004.  Previously he was chief of the section of pediatric endocrinology and program director of the Children’s Clinical Research Center.A native of Bethlehem, Pennsylvania, Dr. Genel is a graduate of Moravian College and the University of Pennsylvania School of Medicine.  He received postdoctoral training at Mount Sinai Hospital, NY, Johns Hopkins Hospital, and the Children’s Hospital of Philadelphia.  Dr. Genel was a Robert Wood Johnson Health Policy Fellow at the Institute of Medicine in 1982-83.  He is the author or co-author of more than 150 original articles and has made numerous presentations at national and international scientific meetings and professional conferences.

Dr. Genel has served at the interface between biomedical research, clinical endocrinology and public policy in many capacities.  Dr. Genel was a member of the National Children’s Study Federal Advisory Committee from 2005-2008 and concluded a three year term on the Secretary’s Advisory Committee on Human Research Protections (SACHRP) in July 2009.  He is a founder of the Connecticut Stem Cell Coalition and from 2005 to 2013 was a member of Connecticut’s Stem Cell Research Advisory Committee which over ten years distributed $100 million in state funds to support embryonic stem cell research. He was a member of the Connecticut General Assembly’s Children’s Mental Health Task Force from October 2013 to September 2014 and in November 2015 was appointed to the Connecticut Commission on Children. Dr. Genel was part of an international, interdisciplinary team which succeeded in eliminating gender verification in international athletic competition, including the Olympic Games.  More recently he served as a consultant to the IOC’s Medical Commission on issues relating to participation of transsexual athletes and athletes with disorders of sexual development.  Dr. Genel was a charter member of the Institute of Medicine’s Clinical Research Roundtable which met from 2000-2004.

For 27 years, beginning in 1984, Dr. Genel directed the public affairs activities of three major pediatric academic and research societies: the American Pediatric Society, the Association of Medical School Pediatric Department Chairs, and the Society for Pediatric Research, all members of the AAMC’s Council of Academic Societies (CAS).  He was a member of the CAS Administrative Board from 1987-1992, serving as chair in 1990-91.  Dr. Genel was a member of the American Medical Association (AMA) Council on Scientific Affairs for seven years beginning in 1994 and served as its chairman in 1999 and 2000.  He served on the governing council of the AMA Section on Medical Schools for ten years beginning in 1995 and was the Section’s chair for the year beginning in June 2003.  He was a member of the American Academy of Pediatrics’ Committee on Federal Government Affairs from 1984-2010 and in 1999 received the Abraham Jacobi Memorial Award from the Academy and the American Medical Association given to a pediatrician “who has made notable contribution to pediatrics on a national level”.  He received the Distinguished Service Award from the Society for Pediatric Research in 2003,  the Joseph W. St. Geme, Jr. Leadership Award from the Federation of Pediatric Organizations in 2004 and the President’s Certificate for Outstanding Service from the American Academy of Pediatrics in 2010.  Dr. Genel was elected to membership in the Connecticut Academy of Science and Engineering in 1992 and was a member of its executive council from 2000 to 2012.  He was the Academy’s president for two years beginning in July 2008.