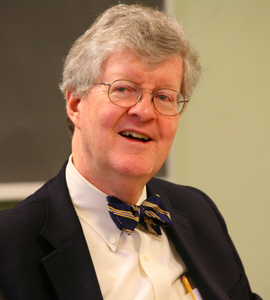 Professor Troeger has written twenty books in the fields of preaching, poetry, hymnody and worship, is a frequent contributor to journals dedicated to these topics, and is a monthly columnist for Lectionary Homiletics and The American Organist.  His most recent books include Wonder Reborn: Preaching on Hymns, Music and Poetry; God, You Made All Things for Singing: Hymn texts, anthems, and poems for a new millennium; So that All Might Know: Preaching that Engages the Whole Congregation (with Edward Everding); Preaching While the Church Is Under Reconstruction; Above the Moon Earth Rises: Hymn Texts, Anthems and Poems for a New Creation.

He is also a flutist and a poet whose work appears in the hymnals of most denominations and is frequently set as choral anthems. For three years Professor Troeger hosted the Season of Worship broadcast for Cokesbury, and he has led conferences and lectureships in worship and preaching throughout North America, as well as in Denmark, Holland, Australia, Japan, and Africa. Ordained in the Presbyterian Church in 1970 and in the Episcopal Church in 1999, he is dually aligned with both traditions. He has served as national chaplain to the American Guild of Organists and is a former president of the Academy of Homiletics (the North American guild of scholars in homiletics) and the immediate past president of Societas Homiletica (the international guild of scholars in homiletics). He was awarded an honorary D.D. degree from Virginia Theological Seminary. Professor Troeger is a fellow of Silliman College.