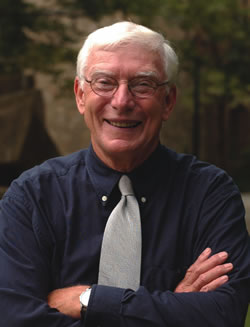 Traugott Lawler, Professor Emeritus of English, came to Yale as an instructor in English after completing his Ph.D. at Harvard in 1966. He was at Yale for six years, serving for most of that time as assistant director of graduate studies in English and teaching mostly Old English, English 25 (Major British Poets), and English 29 (European Masterpieces). In 1972 he went to Northwestern, where he taught Chaucer, Old English, a survey of English literature, and writing. He returned to Yale as professor of English in 1981, where he continued to teach Chaucer, both in seminar and lecture; designed a graduate course in Piers Plowman and taught it many times; and continued to teach English 25 and 29. He was master of Ezra Stiles College from 1986 to 1995 and acting master from 2002 to 2003. His publications include a book on The Canterbury Tales in 1980 and a number of essays on Piers Plowman from 1990 to the present.