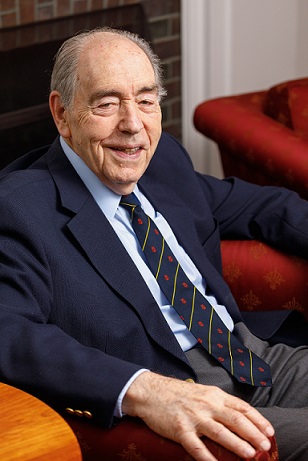 Professor Wolf was born in Vienna in 1930.  In 1938 his family moved to England and in 1947 he won an Open Scholarship to New College Oxford to read physics.  He received a B.A. in 1951 and a D.Phil. in 1954, working with A.H. Cooke at the Clarendon Laboratory.  His research involved both experimental and theoretical studies of new magnetic materials, a field in which he would work for the rest of his life.  From 1954 to 1963 he continued to work at the Clarendon Laboratory, except for one year, (1956–1957), which he spent at Harvard’s Division of Engineering and Applied Physics with J.H. Van Vleck and C.L. Hogan.  In 1963 he resigned his position at Oxford and emigrated with his family to take up an appointment at Yale in both the Department of Physics and the newly formed Department of Engineering and Applied Science.  He arrived with two tons of equipment shipped from Oxford and set up a laboratory to produce and study new magnetic materials.  At Yale he continued to work closely with a succession of outstanding graduate students and postdoctoral associates, whose training was always an important part of the research.  In 1984 he was appointed Raymond J. Wean Professor of Engineering and Applied Science.  Starting in 1973 he held a series of administrative positions including Director of Graduate Studies (1973–1976) and Chairman of the Department of Engineering and Applied Science (1976–1981), Chairman of the Council of Engineering (1981–1984), Director of Undergraduate Studies of Applied Physics (1987–1994), Chairman of Applied Physics (1990–1997), and Director of Educational Affairs for Engineering (1994–1999), and he was thus very much involved with shaping the programs in Engineering and Applied Science during the long period when their role at Yale was under constant evolution.  He retired at the end of 2001.