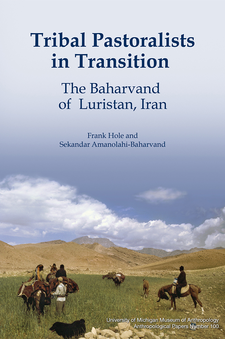 The Koerner Center is pleased to announce that Frank Hole, C. J. MacCurdy Professor Emeritus of Anthropology, co-released a book with Sekandar Amanolahi-Baharvand last month entitled Tribal Pastoralists in Transition: The Baharvand of Luristan, Iran. As part of Professor Hole’s research on the history of nomadic pastoralism, he joined the spring migration of a tribe of nomads in Luristan, Iran, in 1973. The camp, one of hundreds of similar tribal camps, moved with its flocks from lowland pastures to summer pastures in the high Zagros Mountains. The book is a memoir of that trip, which describes a nearly extinct, pre-modern way of life. What has happened to the people since 1973 is told by those surviving and their children. Five videos shot by Professor Hole accompany the book. One depicts the migration, showing much that cannot be readily visualized in the book. The other videos show pre-industrial village life, farming, weaving tent covers and carpets, and crafts in medieval-like bazaars.

Professor Hole taught at Rice University for seventeen years before coming to Yale in 1980. He has been head of the Anthropology Division of the Yale Peabody Museum, and C. J. MacCurdy Professor of Anthropology. He is a member of the National Academy of Sciences. Over a span of some forty years, Professor Hole has traveled and carried out archaeological, ethnographic, and land use research in the Near East, first in Iran and currently in Syria. His specialty is the history and development of agriculture and animal husbandry. Excavations at Ali Kosh and Chagha Sefid in the Deh Luran Plain in Iran provided some of the first substantial evidence for the early stages of agriculture. His study of modern nomadic herders led to the excavation and interpretation of an 8,000-year-old herders’ camp. In Syria he has carried out a series of reconnaissance surveys and excavations ranging from the Neolithic to the third millennium. He has been co-PI on NASA grants to study land use in Southwest Asia. The land use studies have focused on changes in agricultural systems over the thirty-year record of satellite images. Combining these with archaeological evidence, he is reconstructing a 9,000-year history of land use for the Khabur region of northeastern Syria.