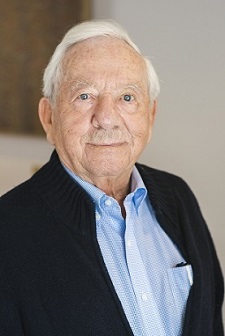 The Koerner Center is pleased to announce that Joseph LaPalombara, Arnold Wolfers Professor Emeritus of Political Science and Management, recently published a children’s book and his first work of fiction, Fescue: A Brave Blade.

Edited by the author’s son, David LaPalombara, and illustrated by Callie Smith, the book tells the story of Fescue, a blade of grass, “who dares to be different, to grow up, and to see the world around him.” David recalls the exciting stories Joseph would tell his three children on car rides: “When we were kids on long trips, usually to Maine, we would be bored and ask our father to tell us a story … Fescue was one of them.” Joseph typed up a manuscript of the story when David was in high school and gave it to his children. David kept the text for over forty years with the intention that, someday, he would find a way to have the book illustrated.

While Fescue: A Brave Blade is a children’s book, it is a story for all ages. It is a depiction of the human experience—one of inquiry and discovery, of resilience and growth. Published by Hand Twin Press of Athens, Ohio, the book may be purchased here.

Professor LaPalombara is a member of the American and the Connecticut Academies of Arts and Sciences and has held fellowships from the Center for Advanced Study in the Behavioral Sciences and from the Guggenheim, Rockefeller, and Ford Foundations, the Twentieth Century Fund, the Social Science Research Council, and the Fulbright Program. He has been awarded the Medals of Honor by the Presidency of the Italian Republic and by the Italian Constitutional Court. He is editor-in-chief of Italy Italy magazine, editor of the Journal of International Business Education, and a member of the editorial boards of several scholarly journals. His current research is focused on the relationship between public policies, global corporations, and the flow of foreign direct investment to less-developed countries. Publications include Politics Within Nations (1974); Democracy, Italian Style (1987); Multinational Corporations and Developing Countries (1981); two chapters (“Underestimated Contributions of Political Science to Organizational Learning” and “Power and Politics in Organizations”) in Handbook of Organizations Learning (2001); and Stati uniti? Italia e USA a confronto (2009).