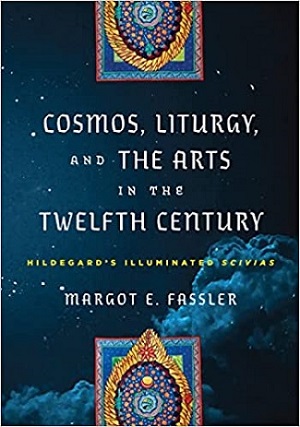 In Cosmos, Liturgy, and the Arts in the Twelfth Century, Koerner Fellow Margot E. Fassler takes readers into the rich, complex world of Hildegard of Bingen’s Scivias (meaning “Know the ways”) to explore how medieval thinkers understood and imagined the universe. Hildegard, renowned for her contributions to theology, music, literature, and art, developed unique methods for integrating these forms of thought and expression into a complete vision of the cosmos and of the human journey. Scivias was Hildegard’s first major theological work and the only one of her writings that was both illuminated and copied by scribes from her monastery during her lifetime. It contains not just religious visions and theological commentary, but also a shortened version of Hildegard’s play Ordo virtutum (“Play of the virtues”), plus the texts of fourteen of her musical compositions.

These elements of Scivias, Fassler contends, form a coherent whole demonstrating how Hildegard used theology and the liturgical arts to lead and to teach the nuns of her community. Hildegard’s visual and sonic images unfold slowly and deliberately, opening up varied paths of knowing. Hildegard and her nuns adapted forms of singing that they believed to be crucial to the reform of the Church in their day and central to the ongoing turning of the heavens and to the nature of time itself. Hildegard’s vision of the universe is a “Cosmic Egg,” as described in Scivias, filled with strife and striving, and at its center unfolds the epic drama of every human soul, embodied through sound and singing. Though Hildegard’s view of the cosmos is far removed from modern understanding, Fassler’s analysis reveals how this dynamic cosmological framework from the Middle Ages resonates with contemporary thinking in surprising ways and underscores the vitality of the arts as embodied modes of theological expression and knowledge.

Margot Fassler, Robert Tangeman Professor Emerita of Music History, Yale University, is the Keough-Hesburgh Professor of Music History and Liturgy and director of the Program in Sacred Music at the University of Notre Dame. Recent books include Music in the Medieval West and its accompanying Anthology (New York, 2014); and, as co-author, Life and Latin Learning at Paradies bei Soest, 1300-1425: Inscription and Illumination in the Choir Books of a North German Dominican Convent, 2 vols. (Munster, 2016), and as co-editor, Medieval Cantors and Their Craft (New York, 2017). Fassler is a member of the North American Academy of Liturgy, a former president of the Medieval Academy of America, a fellow of the American Academy of Arts and Sciences, and an honorary member of the American Musicological Society. Her digital work includes documentary studies of contemporary congregations. A digital model of creation and cosmos based on the illuminations of Scivias (with Christian Jara) will appear in 2023. Her book Cosmos, Liturgy and the Arts in the Twelfth Century: Hildegard’s Illuminated Scivias is forthcoming with the University of Pennsylvania Press. These works have been supported by grants from the Luce Foundation, the Guggenheim Foundation, and the ACLS. In 2019–20, Fassler was a fellow at the Radcliffe Institute, Harvard University.

For further information and to pre-order the book, click here.