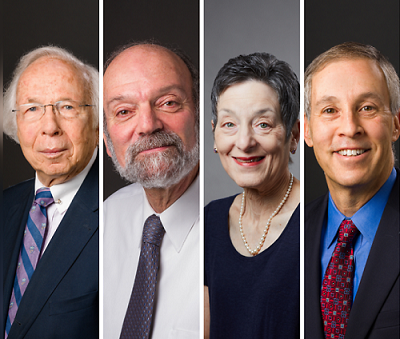 The Section of Cardiovascular Medicine recently announced the creation of a distinguished lectureship series honoring School of Medicine faculty who have exemplified a lifetime of clinical and academic excellence at Yale. Four Koerner fellows, Lawrence Cohen, Henry Cabin, Lynda Rosenfeld, and Barry Zaret, are recognized among the six distinguished faculty who have transformed their respective fields. Eric J. Velazquez, M.D., the Robert W. Berliner Professor of Medicine (Cardiology) and section chief, relayed that the Section is “thrilled to initiate this long overdue honorary lectureship series … as we celebrate the accomplishment of these icons at Yale and in our field.”

The lectureships honorees and dates are:

As the former section chief in the Section of Cardiovascular Medicine, Lawrence S. Cohen, MD, the Ebenezer K. Hunt Professor Emeritus of Medicine, oversaw the early growth of cardiac catheterization, coronary arteriography, and coronary care for patients at Yale New Haven Hospital. He initiated the Yale trials comparing medical cardiac treatment and bypass surgery in patients with stable angina pectoris. He then led the Yale trials of thrombolytics in unstable angina and myocardial infarction and laid the foundation for much of the subsequent clinical trials research in the section. Cohen, an accomplished teacher, started and for thirty-nine years led the medical student course in cardiac auscultation, “Learning Heart Sounds.” He is a recipient of the Francis Gilman Blake Award of the Yale School of Medicine for Outstanding Teaching of the Medical Sciences; past president of the Association of University Cardiologists; and past president of the Interurban Clinical Club, founded by William Osler in 1905. He also chaired the Clinical Trials Review Committee of the National Heart, Lung, and Blood Institute for two terms.

Cohen’s successor, Barry L. Zaret, MD, the Robert W. Berliner Professor Emeritus of Medicine, was appointed chief of cardiology in 1978, a position he held until 2004. Zaret is the founder of the field of nuclear cardiology and has contributed immensely to the understanding of coronary blood flow physiology, ventricular function, management and risk assessment of cardiovascular disease, the development of core laboratories for large clinical trials, and the development of molecular imaging. He was the founding editor-in-chief of the Journal of Nuclear Cardiology, a position he held for twelve years. His textbook Clinical Nuclear Cardiology: State-of-the Art and Future Directions, co-edited with Dr. George Beller, is the preeminent textbook in the field. He served as President of the Association of Professors of Cardiology, an organization he helped found. Zaret continues as a member of the full-time faculty.

A widely respected clinician and educator, Lynda Rosenfeld, MD, Professor Emeritus of Medicine, graduated from Tufts University summa cum laude with a biology degree and enrolled in Cornell University Medical College where she earned her medical degree in 1976. She subsequently completed her residency and internship at Cornell Medical Center and began her Yale career in 1979 as the first female cardiovascular medicine fellow at the Yale School of Medicine. Two years later, she became the first Yale fellow in the emerging subspecialty of cardiac electrophysiology under William Batsford. Rosenfeld was later appointed as an associate professor of medicine in cardiology in 1982, subsequently received a joint appointment in the Department of Pediatrics and was promoted to professor. For many years she served as the Director of the Clinical Cardiac Electrophysiology Fellowship Program and the Medical Director of the Yale New Haven Health Heart and Vascular Center Anticoagulation Clinic and Firm Chief of the Goodyer Teaching Service.

Henry Cabin, MD, Professor Emeritus of Medicine, is the former interim chief of the Section of Cardiovascular Medicine. Cabin is an interventional cardiologist with decades of experience performing cardiac catheterizations, angioplasty, and stenting procedures. Together with Michael Cleman, he launched the angioplasty program in the 1980s.

For additional information about the honorees and series, click here.